Thanks for the photos you sent. I’m having fun putting together photos and hoping to tell some of the stories for friends here in Normandy Park. We all loved our day with you - even though it wore you out! Sending along a few photos. Feel free to use for a website or anything you want. Especially the willie one. That is priceless.Let me know the best place to leave a review of your tour and I’ll do it!
Best of luck with future endeavors and we’ll look you up if we come back to Normandy, We’ll come stay in the haunted attic :-))Betsy
(Andy, Henry, Kirsten, Matt and Harrison) 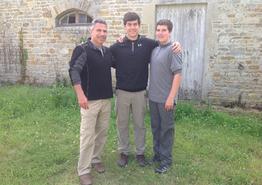 Thanks for everything Chris we really enjoyed our tour with you.

Thanks mate. Been meaning to email you. Burning down Dublin tonight on our last night " over there". If its fine with you i would like to post a link to your company to the 82nd airplane gang association Facebook page to get you some exposure. We had a great time with you and appreciate the hard work you put into it and you being so accommodating in our flash tour of Normandy.

Just a quick note to say thank you very much for Sunday. We enjoyed it very much and were amazed at your knowledge and explanations. My brain certainly hurt by the time you left us! We visited the 360 cinema the next day (I did my best not to cry!) and the children insisted we bought a copy of The Longest Day. They have sat down and watched it – absolutely glued to the screen and it has made me realise how much information they actually took on board on Sunday (even Oscar). They were pretty much providing a running commentary for the entire length of the film and Lily says she wants to be a war historian when she’s older – you’ve really made a mark on us.

Thank you once again and good luck with your enterprise in France – what with both countries now facing elections and Brexit we’re all keeping our fingers crossed.
Take care 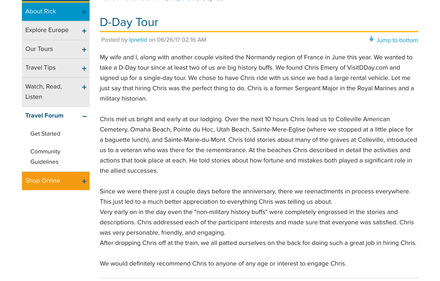 My husband and I started looking months ago for a guide to the D Day beaches and we happened upon Chris Emery, a retired British Royal Forces Commando, at www.visitdday.com. Chris met us at our Bayeux hotel yesterday promptly at 9:00 - I figured that since my husband is also a Vet that the two of them would hit it off immediately (and they did), but what I didn't realize was how enthralled I'd be by his knowledge of not only what happened that day, but the events preceding the battles and the fallout afterwards. We started at Omaha Beach, then had a tour of the American Cemetery, where we spent a good hour with him pointing out graves, heard the story of the three paratroopers at St Marie Eglise, visited the monuments and studied the map of the strategy of the Allied Forces. We then sat on the bluffs and had a picnic that his wife had made for us. We moved on to Pointe du Hoc - I was speechless, but not as speechless as I was when we drove  to the "country church" of Angoville-Au-Plain and explained the courageous act of two American Pvts who stayed behind with the wounded - it was not only their countrymen they saved. We went on to Utah Beach and ended at St Marie Eglise. It was an exhausting day, but so special for us to be with someone who not only knew the historical facts, but as a former combat officer could give an insight as to how these men really felt going into battle. It was a wonderful experience. I would highly recommend Chris as your D Day guide. Liz

I wanted to tell you how much Carole and I enjoyed the amazing day tour with you in early May. The sometimes threatening weather held off and we were able to enjoy the time you spent with us...learning about the battle, the individuals engaged, and Normandy itself. After the full day you spent with us, Carole and I went back to a number of he places to soak it in with more time. We waited until the tide was nearly out on Omaha and walked out as far as we could to get an understanding of the open distance to where the hills began. It was amazing. We spent some more time at the American cemetery and later went to Arramanches, and the 360 theater. It was the right move to spend the first day with you because it put everything into perspective. I did make it to St. Lo where my father was engaged after his landing on Omaha on D+3. Most memorable from your tour was the time on the beach near the 29 th memorial, the small church with the two heroic medics, and the final drive into Carentan. I most vividly remember you drawing the ap by hand in the sand....that impressed me but made it so understandable for my wife...the ultimate sand table.

Of the ladies, I am the only history nut and well read in WW1 and WW2, and these ladies LOVED the tour, you had their attention for a full day, some other tours had their attention for 1 hour tops....we had all agreed it was the most amazing day and the most amazing tour, you brought everything alive for us AND we were escorted by a Commando, when we shared that back home, people thought it was so cool-I guess you guys are lethal! Thank you so much. I will be back for sure.

HI Chris, we really did enjoy our day with you as well as meeting you and your family.  Tuesday was good too, we covered a lot of ground it two days!  Paris was good as was Le Mans.  All in all, a good week!
No bad dreams!!
Let us know if you are ever in New York!