The British Commandos were formed during the Second World War in June 1940, following a request from the Prime Minister of the United Kingdom, Winston Churchill, for a force that could carry out raids against German-occupied Europe. Initially drawn from within theBritish Army from soldiers who volunteered for the Special Service Brigade, the Commandos' ranks would eventually be filled by members of all branches of the United Kingdom's armed forces and a number of foreign volunteers from German-occupied countries.

Reaching a wartime strength of over 30 individual units and four assault brigades, the Commandos served in all theatres of war from theArctic Circle to Europe and from the Mediterranean and Middle East to South-East Asia. Their operations ranged from small groups of men landing from the sea or by parachute to a brigade of assault troops spearheading the Allied invasions of Europe and Asia.

My name is Chris Emery. After serving 26 years in the Royal Marine Commandos, I retired  to Normandy to continue my interest in military history.

During my time as a "bootneck" I was located in many war zones. In the first Gulf War, in Desert Storm under 'Stormin' Norman Schwarzkopf', with 3 Commando Brigade. The invasion of Iraq in 2003 in President Bush's 'Shock and Awe' campaign  with Commando Helicopter Force.  In Afghanistan, 2010, based in the notorious Helmand Province, Sangin, with 40 Commando, alongside the elite Expeditionary Marine Force fighting the Taliban.

Between operations I exercised in the steaming jungles of Brunei,  and in the deserts of Oman, Kuwait, Iraq and Saudi Arabia.

Many times I have trained in the Arctic with the Marines becoming an "Arctic fox". I conducted many amphibious exercises in Norway, Mediterranean sea, South China Sea and America.

I have completed numerous beach landings in all types of vessels from rigid raiders storming the beaches, in landing craft, and in vehicles submerged up to my neck in sea water.

I finished my time as a Colour Sergeant/Master Sergeant instructing Marines in the art of amphibious armoured fighting vehicles.

While my lifestyle still has an involvement in military history my heart remains with 40 Commando Royal Marines. 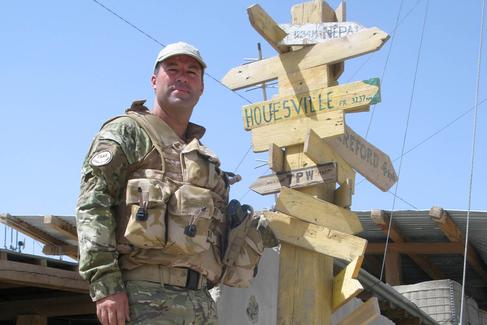